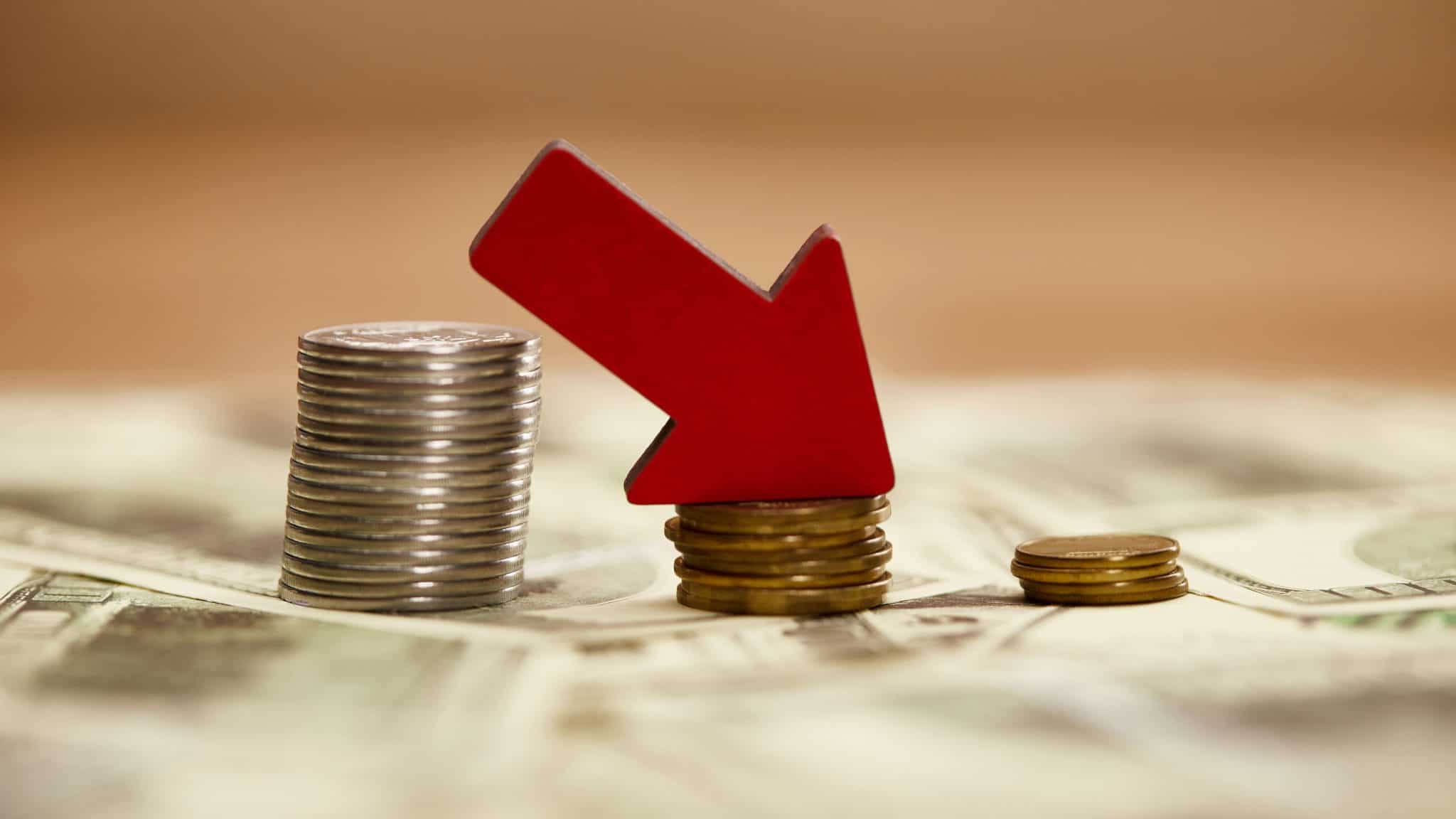 Is Canada going into a Recession in 2022?

The traditional definition of a recession is two consecutive quarters of negative growth in the gross domestic product (GDP).

The National Bureau of Economic Research’s (NBER) definition of a recession takes a broader view of the economy. According to the NBER, a recession is defined as “a significant decline in economic activity that is spread across the economy, and that lasts more than a few months” The NBER has a specific committee that looks into the depth, duration, and distribution of the decline in economic activity over some time.

Is Canada currently in a recession?

The Canadian economy is facing some challenges, but the country is not in a recession — at least not yet. Canada is teetering on the edge of a recession, which will likely be confirmed when Statistics Canada’s gross domestic product (GDP) report comes out.

Many financial analysts have suggested that Canada is at high risk of entering a recession shortly. But what does “at risk of recession” actually mean? And how likely is it that Canada could experience another economic downturn anytime soon? Read on to find out.

History of recession in Canada

The Great Recession of 2008-2009 took its toll on every country worldwide. The recession officially started in December 2008 and lasted until June 2009. Even though Canada was one of the hardest hit countries, we have come out of it better than most developed nations.

The fallout from the financial crisis of 2007-2008 led to a global recession in 2009. This was when many countries around the world saw their economies slow down or even come to a complete halt. The global recession severely impacted the U.S., Europe, and many Asian countries. The Canadian economy, heavily dependent on exports, was hit even harder by the previous downturn (recession). The unemployment rates were at an all-time high. (see chart below)

Unemployment Rates Higher during a Recession 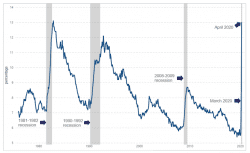 As soon as the recession was over, Canada was hit with the worst oil price drop in 35 years. The price of oil continued to plummet, leaving the Canadian economy reeling. Canada relies heavily on oil exports, and a price drop of this magnitude meant significant losses for the country.

Meanwhile, the world economy was slowing down, which meant less oil demand. Also, OPEC, the Organization of Petroleum Exporting Countries, decided not to cut production, which contributed to the drop in oil prices. This meant that Canada would be hit particularly hard by the price drop.

It was the worst recession Canada had seen in over 70 years.

Reasons for a more robust economy and recovery

The Canadian economy has steadily recovered since the recession and is now considered one of the strongest in the world.

There are several reasons behind Canada’s economic recovery. These include low-interest rates, strong economic growth in the United States, the weakened Canadian dollar (which boosted export demand), the stock market being at an all-time high, and the job market going from bad to good in months.

Is Canada heading into a potential recession?

Let’s examine why many analysts think a recession is at the door. The post-pandemic economy is unique and has created a different set of factors. Energy prices have spiked, leading to food and gas prices going through the roof; household debt is growing by the day; as a result, inflation shock hit economies worldwide.

The geopolitical concerns over Russia’s invasion of Ukraine have jeopardized the global oil supply. The pandemic has left behind backlogged supply chains and pent-up demand for goods and services. However, inflation rates have risen steadily, month over month, in Canada and the U.S., and in general, widespread inflation all over the globe.

However, the U.S. and Canada still have high wages and low unemployment, thus making a case for a more robust labour market. There still is a demand for higher wages, and employers are willing to acquiesce to the need of the hour. According to Statistics Canada, Canada’s unemployment rate is at its lowest percentage point, with a record low of 4.9% (as of June and July 2022). 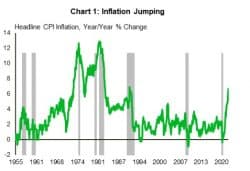 Last month, the Bank of Canada’s Governor Tiff Macklem highlighted his concerns that eroding consumer confidence could cause real damage. “If the economy slowed sharply and unemployment rose considerably, the combination of more highly indebted Canadians and high house prices could amplify the downturn,” he said.

The central banks have the tools necessary to tame inflation. In times of inflation, they hike the speeds to slow down the economy to dampen consumer spending and thus maintain the balance between supply and demand in the market. The Bank of Canada meets eight times annually to decide interest rates. 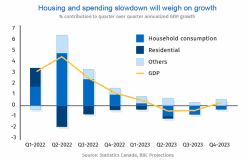 However, the central banks tread a fine line; too many rate increases will slow down the economy leading to an economic downturn and eventually a recession. But having said that, the Bank of Canada still has room to maneuver.

The chart below (source Bank of Canada, Statistics Canada) shows the historical interest rate hikes by the central bank (Bank of Canada) over the years. For the longest time, we have been in a low-interest-rate economy. We are currently in an environment of rising interest rates to bring about an economic contraction to control inflation. And the expectation is still three more interest rate hikes are on the cards until at least the end of 2022. 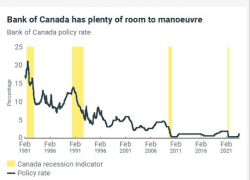 The prices are still going up too fast, and inflation won’t slow down sustainably until demand decreases. However, once that happens, central banks will lower interest rates again. In the meantime, a slowdown in Canada and other countries will help inflation settle down.

There are signs that inflation expectations are peaking in U.S. and Canada. Shipping costs have fallen, and exceptionally more robust demand for goods in the market has led to supply chain issues and higher input costs. This is now beginning to wane as consumers shift spending to products that were not available during the pandemic lockdown in Canada and abroad.

However, central banks will slash interest rates once demand declines. A decline in both Canada and abroad will help tame inflation. The rise in key interest rates is helping cool down the housing market as national home prices have fallen in Canada by an average of at least 16.7%. (see Chart below – Source CREA) 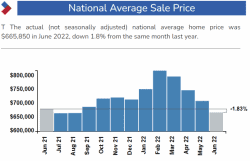 The housing market is now in balance, with sales-to-new listing ratio at 51.7%, the lowest since January 2015 (see chart below- Source CREA). 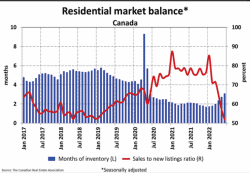 In Canada, the analysts’ opinion is that there could be a possible economic downturn but not as yet. The Canadian economy is still showing signs of strength even though the housing market is weakening. The positive is that housing prices have fallen even as the interest rate increases. It is an excellent time to buy a home if you have a stable income, a low debt load and qualify for the mortgage.

The labour market is strong, and unemployment is at its lowest percentage point. Neither has Canada shown two consecutive quarters of negative growth in GDP. Oil prices have supported Canada’s economy as it is primarily a resource-based economy; thus, it has done well so far. Another factor favouring Canada is the strong immigrant inflow, whether international students or immigrants. This bodes well for Canada’s economy. So while Europe and other parts of the world are facing an economic contraction, Canada is still not at that point.