Inflation – The Elephant in the Room

Inflation is simply defined as the cost of living going up due to prices increasing across the board from food, transport, gas, housing, utilities, consumer durables, etc. So basically, you get less in the same $100 basket and must budget your expenditure to meet ends.

Due to rising interest rates, borrowing costs go up, tightening the money supply and making it more challenging to borrow money and spend it freely. This is called tightening monetary policy (as opposed to quantitative easing, which lowers interest rates to help the cost of borrowing and increase expenditure to grow the economy). Once the effects of rising interest rates kick in, growth slows down, and market supply conditions have a chance to catch up to market demand.

Generally, the Central banks aim to keep inflation at around 2% annually. Due to the extended nature of the Covid pandemic, the interest rates were kept artificially low for longer. The geopolitical conditions and Russia invading Ukraine compounded the economic conditions globally. This caused a chain reaction of a shortage of oil and gas in the market (which pushed prices of gas and petroleum higher globally) and pushed food prices higher since market supply was short and transportation was hit with higher costs. So slowly but surely, the inflation rates rocketed sky-high worldwide. UK inflation hit a 40-year high of 9.1%; Eurozone inflation touched 8.6%, and the ECB prepared for its first-rate hike in 11 years; the USA hovering around 8.6%, Canada at a 31-year high inching higher to 7.7% and Australia (its first rate hike in more than a decade) at 5.1%.

Last month, the US implemented its steepest rate hike of 75 bps in one shot rather than a slow injection of 25 bps to reign in the steep inflation. It did have some immediate effect, but we will see more significant changes in the coming months.

According to analysts and experts, Canada is expected to follow suit with a hawkish increase of 75 bps. So far, the rate hikes have helped bring the housing market in balance by increasing the historically low supply of housing (experienced in the last 2 quarters) and have tamed the sky-high home prices to some extent. Areas of Toronto and GTA have seen a drop of 8-10%, and some suburbs lower than that. But as far as inflation goes, it is still a wait-and-watch for greater benefits since the unknown factors and geopolitical uncertainty of Russia-Ukraine aggression and oil and gas supply remain in the air.

In Canada, the expectation is that the Bank of Canada will be hawkish and raise 75 bps on July 13 rate announcement. The primary reason is that inflation is still rising and has not peaked. Other factors influencing the decision are the close interdependence of Canada-US economies and the lagging effect in Canada of what happens in the US. To make it clear, when the US catches a cold, Canada gets the sniffles a few weeks later. As inflation has just about peaked in the US, it is still rising in Canada. Having set the expectation, let’s look at a few more aspects.

The fixed mortgage rates are also on the march upwards as the 5-year bond yields have increased. They have seen a 13-year-high recently with an increase of 60 bps in 2 weeks and are now sitting at 3.2%.

What is the impact on Real Estate?

The cost of borrowing has increased both on fixed-rate and variable rate sides, making it more expensive to buy a home.

Higher interest rates have muted price growth but have brought more market balance and improved the housing supply. At the beginning of 2022, the housing supply had tightened to just a 2-week availability compared to an improved 6-week supply currently. This is a positive sign for housing. 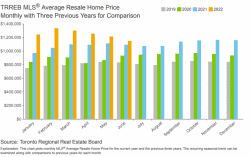 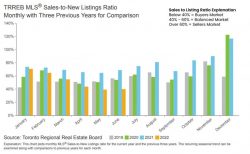 Prices have become more level, and still, the housing market can be defined as a buyer’s market (see chart below) as the Sales-to-New listings ratio is strongly in favour of the buyer’s market (at or below 40). Housing prices are still higher than what they were one year ago, and the expectation is that they will not drop in the long term. The 3-year chart below clearly shows the increase in home prices.