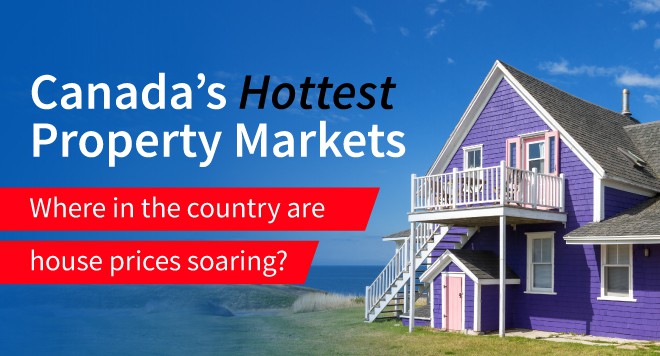 In recent years, Canada has seen a boom in people looking to live and settle in the country. Between 2020 and 2021, over 220,000 people moved to Canada, which goes to show just how popular the country is.

With a unique balance of breathtaking scenery and busy, vibrant cities, as well as one of the world’s best healthcare systems, Canada has a lot going for it. The country has one of the freest economies in the world, according to The Heritage Foundation with a global rank of 15, while also being ranked the 15th happiest nation in the 2022 World Happiness Report, so it’s no wonder that so many people want to build a new life in Canada.

As real estate in Canada becomes increasingly desirable, where in the country are house prices at their highest? And where are they rising the fastest? To help answer these questions, we here at Save Max have put together a 2022 overview of the Canadian housing market, comparing house prices at both the regional and city level.

The Canadian housing market at a glance

Before diving into comparisons between different areas, it’s worth considering how the overall property market in the country is faring. Here we can see snapshots of various factors within the property market each year since 2020, showing how it has changed over time. 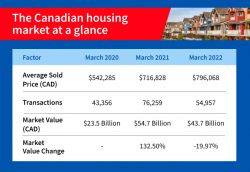 The average sold price of a property in Canada reached record levels in 2022, sitting at 796,068 in March of this year. This is a rise of just under $80,000, which is a considerable increase, though is dwarfed by the soaring prices seen in 2021 when prices increased by approximately $175,000 in the previous year. This huge increase is likely due to pent-up demand that resulted from pandemic restrictions and nervousness in 2020.

Despite average property prices continuing to rise in 2022, the overall number of transactions appears to have dropped compared to 2021 levels. This is also a likely result of pent-up demand booming in 2021, with much of that demand dissipating since. However, the number of transactions in 2022 is still approximately 25% higher than in 2020, indicating that there are currently plenty of people looking to purchase a home in Canada.

The regions with the highest average house price

Average house prices vary depending on where you live, which is true anywhere in the world. When looking at house prices in Canada, we wanted to compare regional differences, as well as variations from city to city, so that you can see how prices differ for all parts of the country. 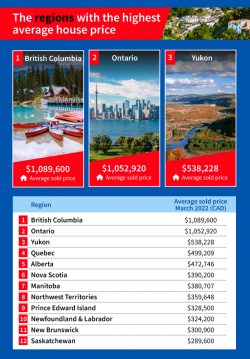 The regions where house prices are increasing the most

It’s not just current house prices that are worth considering, but also how sharply they’re rising. Property values across much of Canada have experienced a boost in recent years, much to the delight of homeowners and the horror of first-time buyers. In this section, we can see which regions have seen the sharpest increase in house prices from March 2021 to March 2022. 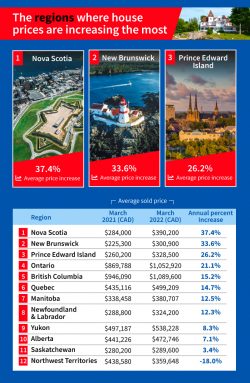 The cities with the highest average house price

We’ve also taken a look at the average house prices in some of the biggest and most  popular cities across Canada to see which urban area is the most expensive to buy in.
Here’s what we found. 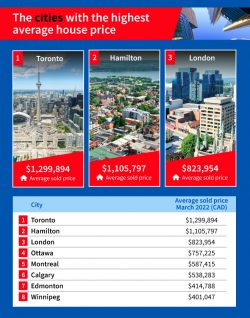 *Comparative price data was not available for Vancouver

The cities where house prices are increasing the most

Again, we have also looked at the rate at which property prices are rising for the cities in our study, comparing prices in March 2022 with those a year earlier in March 2021. 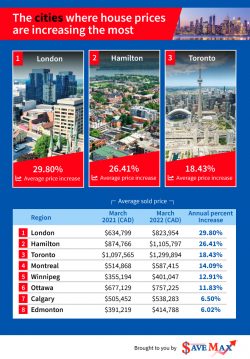