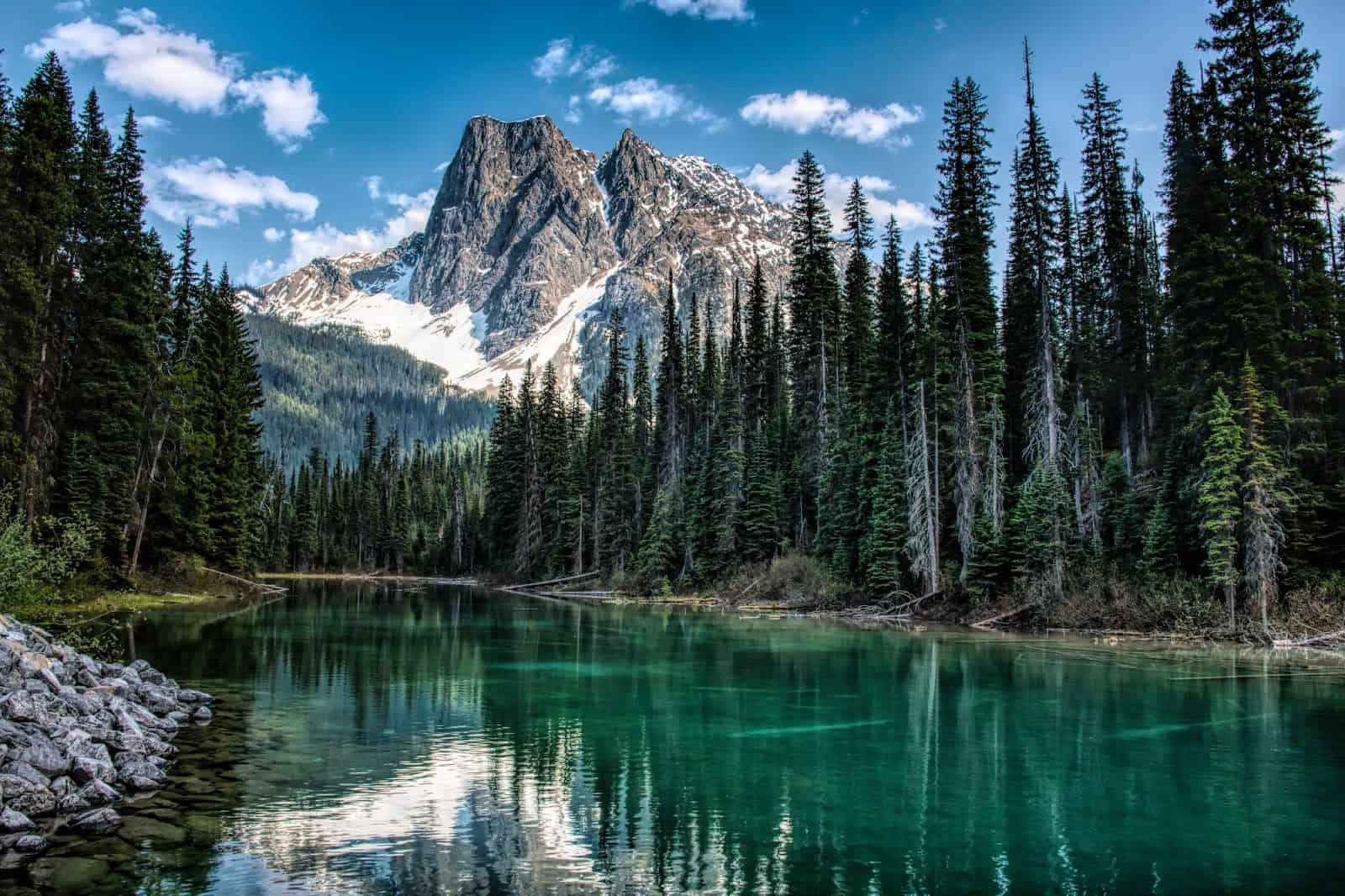 Nestled between the Pacific Ocean and the Rocky Mountains, picture-perfect British Columbia is Canada’s westernmost province. British Columbia has a diverse geography and a stunning mix of mountain ranges, fertile valleys, and beautiful beaches.

British Columbia has eight UNESCO World Heritage Sites and seven national parks. Occupying a tenth of Canada’s land surface, the area is one of the world’s leading producers of cranberries and blueberries.

British Columbia is one of the top choices for anyone considering moving to Canada. In addition to healthcare, entertainment, leisure, and educational amenities, the Canadian province also provides a high-quality education system.

When you live in British Columbia, you enjoy sound transport systems, strong economies, and its beautiful natural environment and warm weather.

However, British Columbia is a costly choice for buying a house. Though the prices are slightly higher than those of Ontario, the costs of buying real estate are the highest in these two provinces. The average cost of homes in British Columbia is over a million, while Ontario is a bit lower at $998,629.

Rentals are also higher in the major cities, especially Vancouver and the Greater Toronto Area.

A place to live is one of life’s necessities and is a prime factor in determining living costs. The smaller cities in both provinces offer more affordable options, but the average price is still higher compared to other regions.

It is highly recommended that you contact an experienced realtor who can help you get the best possible fit for your real estate needs.

With so many advantages, it is no wonder that many Canadians prefer to live in British Columbia. The province is Canada’s third-most populous province, with an estimated population of 5.2 million as of 2021. The capital city is Victoria, which is located on Vancouver Island and has nearly a million residents. However, the largest city is Vancouver, with the 2021 census recording over 2.6 million people in Metro Vancouver.

British Columbia has a long history with the First Nations people, who have flourished here for many thousands of years.

Native art, culture, languages, festivals, and history are essential to this Western Canada province. Nanaimo, Kamloops, and Chilliwack – the names of these cities are all derived from Indigenous words. The Indigenous names for many towns, rivers, lakes, and mountains date back thousands of years.

The province saw a boom in the 20th century, with many significant dams built to power a growing economy. When the Trans Canada highway was completed, many people moved to B.C. to take advantage of its temperate climate, breathtaking scenery, and burgeoning job opportunities.

In addition to the Vancouver CMA, the best cities to live in British Columbia include BC Victoria and BC Richmond. Like other Canadian cities, Vancouver comprises multiple distinct neighborhoods that spread away from the city center.

Vancouver is one of the best cities in Canada, although affordable housing is not its plus point. A beautiful coastal city, Vancouver offers many cultural and historical attractions and is an outdoor enthusiast’s playground supporting an outdoor lifestyle.

Apart from the incredibly scenic Sea to Sky Highway, the densely populated city provides hiking trails such as Sasamat and Langara for its active community life. The Vancouver area is world-famous for its mountain biking trails.

Vancouver International Airport is the second busiest airport in Canada by passenger traffic and provides air connectivity to Vancouver and its surroundings.

Another big city, Victoria also scores high on the list of the best places to live in British Columbia. Although it is British Columbia’s capital city, it has a mild climate and a small-town vibe. A small city with a rich culture, it is also known as the Cycling Capital of Canada.

Victoria’s location and geography make it ideal for many activities such as mountain biking, rock climbing, hiking, kayaking, water sports, etc., including the most grueling hike – the West Coast Trail.

Oak Bay is a scenic coastal community offering picturesque golf courses and beautiful beaches. The small town has great restaurants that allow hungry tourists to sample the local cuisine, all within walking distance of its waterfront.

James Bay is another extensive waterfront choc-a-bloc with both commercial and recreational activity. The neighborhood has many local shops and many community centers and is a hub for many running and walking community events on the waterfront.

Other contenders rank high in the best places to live; Canada’s top 5 fast-growing cities in the last five years include Kelowna, Kamloops, and Nanaimo, all in British Columbia.

Kelowna topped the list of Canada’s fastest-growing cities, gaining 14% in its population over the last five years. Located in the middle of Okanagan Valley, an area that produces some of Canada’s best wines, the beautiful city is also known as the Hawaii of Canada.

Kelowna sits prettily on the shores of Okanagan lake and some of the best nature trails, biking trails, parks, and beaches.

The Kasugai Botanical Gardens in downtown Kelowna offers a serene environment and is a fabulous place to relax. Other popular tourist attractions are the Big White Ski Resort and the Kettle Valley Railroad, which make Kelowna one of the most amazing cities in British Columbia.

The city offers affordable housing and careers with its diverse economy, including manufacturing, tourism, agriculture, wineries, and health care. The average income is marginally lower than the national average, but the living costs are considerably cheaper than in nearby Vancouver.

The resort town of Whistler is famous globally, primarily due to its world-class ski resort – the Whistler Blackcomb.

The small city offers some of the best skiing in Canada, if not the world, with the most consistent and reliable snow in North America. In 2010, both the Olympic and Paralympic Winter Games were held in Vancouver and Whistler.

The scenic drive via the Sea to Sky Highway connects Whistler to Vancouver.

Although it is known for its skiing, the city has numerous lakes and rivers and offers many hiking, biking, and fishing activities, earning it the name of “Summer Fun Town.” Whistler also operates the world’s highest cable car for year-round spectacular alpine views.

The area gets lots of sunshine, and the aptly named Sun Peaks boasts an average of 2,000 plus hours of sunlight annually, assuring skiers of fresh snow and clear skies. Located in the interiors of British Columbia, it boasts of the famous Peaks Resorts’ hiking trails and bike parks.

Kamloops’ economy includes healthcare, tourism, education, transportation, and natural resource extraction industries. The population in Kamloops had a growth rate of 10% in 5 years, and the city offers housing at an affordable price to its residents.

Nanaimo is a fast-growing “Harbour City” with thriving fishing and lumbering industries. The city was sometimes called the “Hub City” due to the design of its original layout, where the streets radiated from the shoreline like the spokes of a wagon wheel.

Located on the east coast of Vancouver Island, Nanaimo has an abundance of outdoor adventures, including scuba diving, boating, sailing, trails, and golf. The city and the surrounding region have seen an explosion in the number of golf courses, with the nearby Nanoose Bay area being a paradise for campers.

Nanaimo is a family friendly city, one of the best lifestyles for retirees and families looking to move to a safe community on the west coast. One of the oldest neighbourhoods, Central Nanaimo, is a well-established locality characterized by larger lots with several condo buildings.

Like Kamloops, Nanaimo saw a population growth of 10% from 2016 to 2021 and made it to the top 5 fast-growing cities in Canada.

The Top 6 Best Cities to Live in British Columbia

And there you have it!

These are our picks for the best cities in British Columbia.

From the big city of Vancouver to the small town of Whistler, British Columbia strongly emphasizes active living with many outdoor activities.

And Finally, Summing Up

Canada ranks very high on the list of the best countries in the world to live in. In recent years, the country has seen rapid growth in people looking to live and settle there.

While you may not be able to live life king-size on an average income, these fantastic cities are a visual feast to the senses and are truly as close to heaven as you can get on Earth.

Contact us, and we shall guide you on the best places to live in British Columbia.